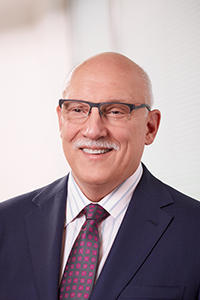 The ceremony will be held at 10 a.m. Friday, May 20, in EagleBank Arena on the Fairfax Campus.

Shea, 65, a former member of Mason’s College of Science Advisory Board, in February was named one of the 50 Most Influential Virginians by Virginia Business. He has served the security, intelligence, business and technology industries in various executive leadership capacities in public and private companies and in government.

Peraton is one of the largest employers in the region according to the Washington Business Journal, with 6,180 employees in the Washington, D.C., metropolitan area, including more than 450 Mason alumni. The company is in the process of moving from Herndon to Reston.

Shea led the corporate split of the Science Applications International Corporation into SAIC and Leidos in 2013. He is the former president and chief operating officer of Leidos. He also led SAIC’s support to the national security community as president, intelligence, surveillance and reconnaissance, and as vice president and executive director of space and intelligence at Northrop Grumman TASC and technical director of PAR Government Systems Corporation.

Shea was founder, president, chairman and CEO of the U.S. Geospatial Intelligence Foundation and founded the GEOINT Symposium, considered the world’s largest gathering of intelligence professionals. He also was chairman of the Senior Advisory Group for two directors of national intelligence, for which he received the Intelligence Community Seal Medallion.

In 2003, Shea was named as one of the 12 members of the National Commission for the Review of the Research and Development Programs of the United States Intelligence Community.

He will receive an honorary doctorate from Mason at the graduation ceremony.