People Mentioned in This Story
Louise I. Shelley
Body

(This story is adapted from the Fall/Winter Schar School Pulse Magazine in advance of the Risk of Climate Change to International Security talk in conjunction with an open house for prospective students. The event is Wednesday, February 23 at 5:30 p.m. ET; free, but register.)

It was something that no foreign adversary has been able to do: Not one but two domestic U.S. military bases were evacuated after coming under heavy fire.

The fire was all too literal: The summer 2021 California wildfires posed threats to Camp Pendleton and Beale Air Force Base, causing hundreds of service personnel and their families to abandon their posts and flee for their lives.

What is left unsaid is the vulnerability—temporary as it may have been—in the U.S. national security strategy.

The wildfires are thought to be the result of the culmination of climate and environmental challenges. In other words, climate change and its unavoidable outcomes is not just a quality-of-life problem, but a national security question.

Last October, the New York Times published a major story describing how Washington, the White House, and the U.S. military are confronting climate change as a global conflict. Little of this is news to the professors and policy experts at the Schar School. In the last few years, climate change has been addressed as an increasingly grave national security issue on multiple fronts, in the classroom and through informed exploration at several research centers. 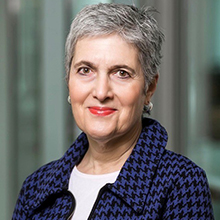 “Within the academic community that focuses on international security, it's been a gradual process of adaptation to embrace the notion that climate needs to be integrated into the field of security studies,” said Ellen Laipson, director of the Schar School’s Master’s in International Security program.

She observes that questions of war and peace, where nuclear weapons were long considered the only truly existential threat to states and societies, “are slowly ceding some space to this profound global challenge that does not fit neatly into geopolitical categories. ‘Climate and National Security’ is now an elective course, but we are likely to see more attention and more resources devoted to it in the near future.”

Adjunct professor Erin Sikorsky has been studying the relationship between climate and national security for years. As deputy director of the Washington, D.C.-based Center for Climate and Security, Sikorsky has mapped climate’s attack on the military.

“The climate hazards we're facing, as they become more frequent and more intense, will put our military infrastructure under risk, but also our civilian infrastructure,” Sikorsky said. “Our electric grid, our distribution of water systems, all of these things were not designed for the climate changes that we're seeing—and will see in the future.

“So, they're going to be increasingly stressed, and potentially fail. And that poses real risks for the U.S.”

Climate as a Transnational Crime 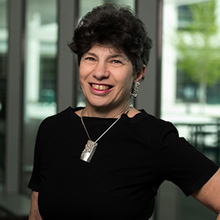 Climate change and its impact on national security starts at what causes the damage to the environment. Louise Shelley, director of the Terrorism, Transnational Crime and Corruption Center (TraCCC) at the Schar School, identifies transnational crime on a massive scale as a significant culprit.

“The most important form of illicit trade contributing to climate change is illegal logging,” she said. “It’s estimated to be a $50 billion to over $150 billion business annually.”

“Presently, 60 percent to 80 percent of the trees in the Amazon are being cut illegally, contributing to the destruction of a rainforest that is needed to absorb carbon from the air,” Shelley said. “The fate of the Amazon is repeated throughout the world as trees in rainforests and hardwood forests are cut illegally at a rapid rate to supply timber for consumer markets and provide land for food production.”

Climate hazards intersect with other strains on national security, said Sikorsky. “When you layer climate shocks on top of that, how does that pose risks in terms of creating further instability and insecurity within communities and creating pressures on government to deliver more to local communities, particularly when they’re already strained quite a bit?”

Those are the questions Sikorsky poses to her students as she prepares the next generation to address these challenges.

“The class itself is designed to bring a climate lens to international relations and national security issues,” she said. “A key way in which the students will be prepared to enter the workforce and understand these issues is if they can bring what I called ‘climate competence’ to whatever career they pursue. Because climate change is an issue that's going to crop up no matter what your career path is.

“Even if climate is not your main focus for your job, it will be something you need to understand and be able to bring to bear in your work. And if you can do that, I think you'll have a leg up in in this job market, frankly, because it is so important.”