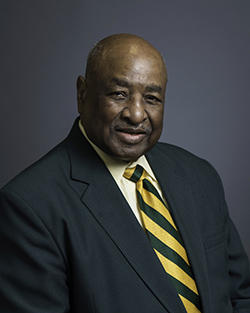 Dr. Butler, a 1992 Doctor of Public Administration graduate from Mason, retired from the classroom in December 2020, having taught undergraduate government classes in the Schar School of Policy and Government for 20 years. In 2010, Dr. Butler established the Butler Family Endowment in Women’s Athletics, which now totals more than $125,000.

Dr. Butler entered Texas’ Prairie View A&M at age 16, joined the campus ROTC program, and entered the Army after receiving his degree in mathematics. After a military career of flying helicopters—including a stint in the Vietnam war—and serving at the Pentagon, he retired as colonel in 1985.

Dr. Butler was the author of The Butler Report, a 16-page statistical analysis of a selected segment of the Army’s ofﬁcer evaluation rating system. The ﬁndings of the report revealed startling disparities in the ratings given to white and black ofﬁcers. These disparate ratings resulted in a pernicious, devastating impact on black ofﬁcers’ promotions, career enhancing assignments, accessions into the Regular Army, selections for advanced military schooling, and, ultimately, and underrepresentation in the leadership of the Army’s ofﬁcer corps.

“His background in the military, serving as an Army officer stationed at the Pentagon, gave him decades of first-hand knowledge about the inner workings of federal bureaucracy,” said Hollinrake. “He understood how to effectively communicate in a large, bureaucratic environment and taught that as part of the course.

“Now that I work in the U.S. Senate, the ability to write memos in order to communicate clearly and concisely is a critical skill. I owe a lot of my training on this to Professor Butler.”

The family will receive friends at the Harvest Assembly Baptist Church, 8008 Fordson Road, Alexandria, Va. on Saturday, July 24, from 9 a.m. until the service at noon.