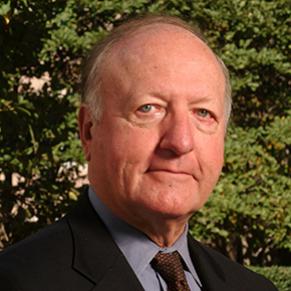 A. Lee Fritschler is professor emeritus in the Schar School of Policy and Government at George Mason University. In addition to teaching responsibilities, he is or has been the Principal Investigator (PI) for more than $8 million in research grants and contracts.

Prior to that appointment, he was vice president and director of the Center for Public Policy Education at the Brookings Institution.

Fritschler was appointed by President Clinton to serve as assistant secretary of education from 1999-2001, where he was responsible for setting higher education policy and administering the department’s higher education programs, which include student, financial aid, FIPSE, GEAR UP, TRIO, international education, the Fulbright program, graduate programs, Developing Institutions, and the White House Initiative on Historically Black Colleges and Universities, among others.

Prior to joining the department, Fritschler was president of Dickinson College in Carlisle, Pennsylvania, from 1987 until his retirement in June 1999. As president of Dickinson, he emphasized international education, undergraduate science, and foreign languages. In 1991, Fritschler cofounded the Annapolis Group, a contingent of more than 100 presidents of the nation’s leading liberal arts colleges created to build support for liberal arts programs in higher education circles and with the general public. He was vice president for the Center for Public Policy Education at The Brookings Institution from 1981-87, and nominated by President Carter to serve as the chairman of the U.S. Postal Regulatory Commission from 1979-81.

From 1977 to 1979, Fritschler was dean of the college of public and international affairs at the American University in Washington, D.C., in charge of managing two schools, three centers, 3,500 students and some 100 full- and part-time faculty. He held a number of other academic and administrative positions at American University between 1964 and 1979. He is currently an elected member of the National Council of the AAUP.

Fritschler is the author of several books and numerous articles and a member of many boards and professional societies. His books include Smoking and Politics: Bureaucracy Centered Policy Making, sixth edition (2007: Prentice-Hall), with coauthor and Mason colleague, Catherine E. Rudder. He has been a guest lecturer at numerous schools and executive programs.