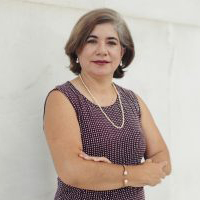 Claudia Escobar is a Distinguished Visiting Professor in the Schar School of Policy and Government at George Mason University. Due to threats and intimidation, the Guatemalan lawyer and former magistrate of the Court of Appeals relocated to the United States, where she works as the executive director of Be Just, an organization that promotes the rule of law by strengthening the institutions of the justice sector, supports anti-corruption initiatives, and respect for human rights.

Escobar received the Democracy Award in 2017 for her commitment to fighting impunity and corruption. In 2019, she was honored by the Harvard Women’s Law Association and Harvard Law in the exhibition “Women Inspiring Change” organized on the school’s 6th Annual International Women’s Day celebration.

Escobar is among a select group of academics in the Centennial Fellows Program at Georgetown University’s Edmund A. Walsh School of Foreign Service. In 2015-16, while a fellow at Harvard University, she became the first Central American to be awarded a fellowship at the Radcliffe Institute for Advanced Study. Her fellowship responsibilities at both institutions included lecturing, mentoring, and research. Likewise, she was selected by the National Endowment for Democracy to join the Reagan-Fascell Fellows Program (2016-17), where she promoted the importance of judicial independence as a tool to fight corruption.

In Guatemala, after her appointment as a Judicial Branch judge in 2007, Escobar served as Judge of the First Instance. Later she was designated as a magistrate in the Court of Appeals. When running for a second term, the head of the Guatemalan Congress conditioned her election upon an exchange for a judgment that would favor the political party and the vice president in government. For this reason, she resigned her position and denounced interference against judicial independence on the part of the legislative and executive powers. Consequently, the congressman received a 13-year prison sentence for bribery and influence peddling.

With other judges, Escobar founded the organization Judiciary Institute in 2009, and she also established the Association for the Promotion of Democratic Institutionality and Comprehensive Development for Central America (Asociación FIDDI)—two organizations dedicated to promoting the rule of law in Latin America. She regularly contributes time and efforts to various civil society organizations in the defense of human rights and the promotion of the rule of law. In 2019, Escobar was elected as commissioner for the International Experts Commission against Corruption in Ecuador by the United Nations Office on Drugs and Crime (UNODC) and the Government of Ecuador.

Escobar is an active member of the Anti-Corruption Advocacy Network (ACAN) in Washington, D.C., and the Academia Against Corruption in the Americas in Mexico. She lives in McLean, Virginia, with her husband and four of her six children.

She has a bachelor’s degree in political science from Louisiana State University. She obtained her law degree at the Universidad Francisco Marroquín in Guatemala, and her PhD and master’s degrees in pluralistic law at the Universidad Autónoma de Barcelona, Spain.